I mentioned a couple weeks ago that I would give you my thoughts on the new Lost in Space series on Netflix, so here goes. No major spoilers, but if you don’t want to know anything about this show before you watch, stop now.

The professional reviews have been mixed, but generally positive. And I’m generally positive as well, though probably not thoroughly satisfied. I don’t really binge a whole series in a weekend, so it’s taken me a while to watch 8 of the 10 episodes (and #8 ends in quite a cliffhanger!). I definitely want to see more, and unless the last two episodes really turn me off, I want a second season.

As expected, the show follows more like the first season of the original series, in that it isn’t silly like the rest of that series, and deals with the Robinsons attempts to survive on one planet. The major difference here is that they are not alone. They are part of a larger colonization effort that goes off track, and their mother ship, bound for Alpha Centauri, gets somehow sent way off course (I suspect a black hole is at work somewhere). The mother ship is a carrier for a bunch of smaller ships, called Jupiters like the original show, but this time the Robinson’s ship is called Jupiter 2 only because it’s #2 of a bunch of them. So when the Jupiters evacuate the damaged mother ship and crash land on the alien planet, the Robinsons have other families and people to interact with (conflicts! love interests! power struggles!).

Having other humans around helps, since the original show had to introduce silly aliens to provide some storylines beyond just the seven main characters, which can get pretty stale in a weekly series.

One of my favorite examples of the silly aliens was a guy who ran the “Celestial Department Store.” The actor’s name was Fritz Feld, and he showed up in a number of TV shows at the time, where he was known for this weird popping thing he did with his hand and mouth (you can see an example at https://youtu.be/VKcg7Dt1-_A). It was kind of his equivalent of snapping a finger, but less hygienic.

Another thing this show does differently are flashbacks, putting the “Lost” in “Lost in Space.” Both the original series and the 1998 movie started with the launch from Earth, but this one starts in the middle of the crash. Eventually, we get flashbacks showing what happened on the mother ship, and often we get flashbacks of the characters’ lives back on Earth. Many of the first flashbacks give evidence for why this Robinson family is not quite so unified as the original one. Mom and Dad were splitting up just before launch, and that gives lots of opportunities for mistrust and resentment, which are leveraged by Dr. Smith,

who is a master of using people’s
insecurities and doubts to get them to do what she wants without ever thinking she talked them into it. I keep thinking “Wormtongue” when she is at her best doing this.

The Robot is also a new wild card for conflicts and storylines, as this time it’s an alien robot, so we can’t ever be sure we can trust it, although Will is convinced it’s good. I look forward to seeing where they go with this character. At least he doesn’t 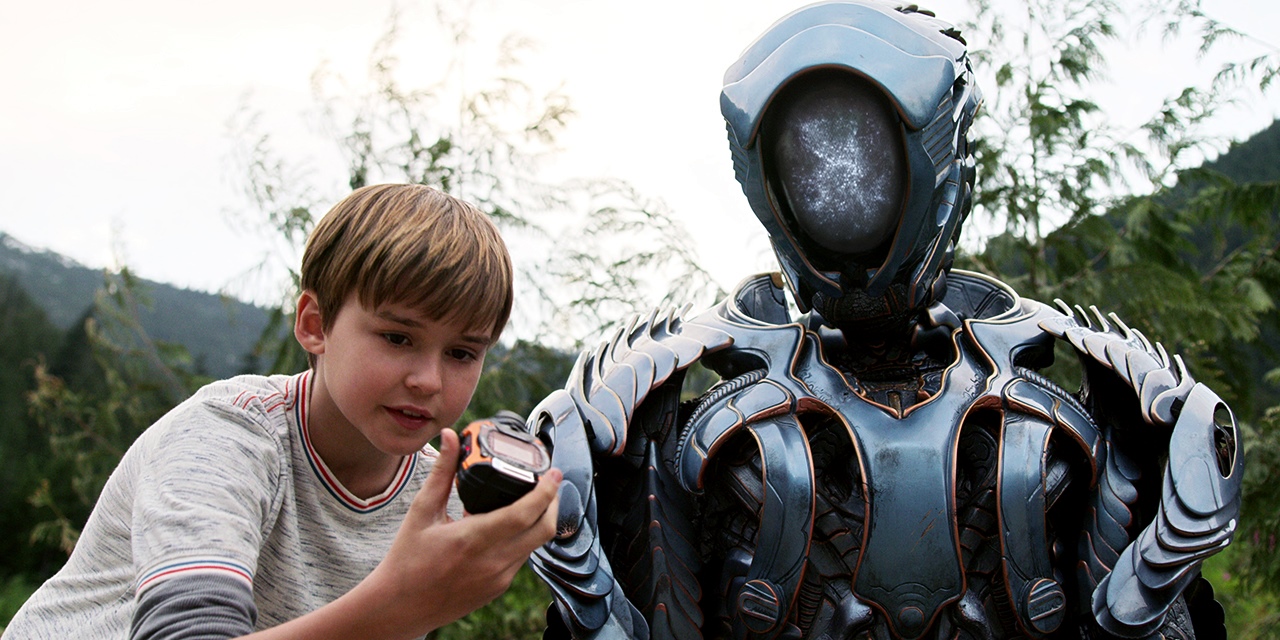 have an easily removed power back on his back that anyone can just pull off to shut him down (Star Trek’s Data made sure to keep the location of his off-switch a secret).

It’s an exciting show, constantly putting the characters in desperate situations, some that you think there’s no way they could survive, but they do. It’s also fun, which is important in these type of shows. It may not always be totally scientifically accurate, but they come pretty close and pay attention to believability, while being willing to sacrifice accuracy when necessary for a good story.

So yes, I do recommend it, especially if you remember the old series fondly, as I do. And the fact that they leveraged the old musical theme without overdoing it is a plus in my book!

One thought on “Lost in Space – review”